You Broke Up With Yourself Before You Got Dumped

Though widely known as the credo of Alcoholics Anonymous, the Serenity Prayer can apply to many facets of life. It’s a passage of beauty and one that’s true for anyone regardless of religion. It’s also a blessing for those who can master its teachings.

The ability to see clearly the things we are in control of and the things we’re not is an essential part of life, especially when it comes to understanding who you are and what makes you happy.

After a breakup, this prayer can come in particularly handy. You’re sad, you’re defeated, you feel as though you don’t have control over anything in your life. You want to stay in bed and sleep, transporting yourself to a place where you aren’t brokenhearted. You spend each waking hour wondering how to get your ex to take you back – you fantasize about running into them at the grocery store, about their number appearing on your phone, about an email telling you they’ve made a mistake.

A common trend in relationships is the loss of self. Boy meets girl (or vice versa) and suddenly he doesn’t hang out with his friends as much. He quits the hobbies and activities he once loved. He gets comfortable – he stops working out and trying as hard. He lets himself go and, as a result, also says goodbye to his self-confidence.

If this story sounds like a bibliography, it’s important to know it’s not your fault (at least not entirely). Losing oneself happens in all kinds of relationships – it often plagues couples over and over again until they finally become aware and consciously break the pattern. The important thing is to start heading in the right direction.

So, how do you do this? The bad news is there isn’t some relational Google Map you can consult to point you towards the right route. The good news is you’re reading this article, so you’ve already taken a step onto the correct path.

If you want your ex back, you have to get yourself back first. This allows your ex to remember the person they fell in love with. Because, if you don’t, anything you say or do to your ex won’t have any power. It will be like revving up the engine of a car that’s stuck in neutral, like jogging in place, like sounding the same as the teacher from Charlie Brown. Wah, wah, wah is all that your ex will hear.

The first step in getting yourself back is to remember the Serenity Prayer and know what you’re in control of and what’s outside of your control.

One of the things you have say over is your health (at least to a point) – your diet and your level exercise. This is often neglected after a breakup (as well as during a relationship), but it doesn’t have to be.

A breakup can be used as fuel to get in the best shape of your life, to feed your body essential energy it needs to handle separation and bounce back into your ex’s life with a renewed sense of lust and vigor.

When you see your ex, the first thing they’ll notice is how you look (yes, this is true even if your ex is a girl), but how you look attests to more than just attractiveness – it is also a symbol of your mental strength, a way to show your ex what they’ve been missing out on.

Another way to get yourself back is to rekindle lost friendships. This doesn’t mean you need to get your high school garage band back together and start playing Nazareth songs, instead it means you should aim to reconnect with people you used to enjoy, people who can help remind you who you truly are.

Building a support network during a breakup is like constructing a life raft on a sinking boat – it can save you from the depths of doubt, chaos, and hopelessness.

Post-breakup can feel post-apocalyptic, as you walk around in a zombie-like trance. You’re numb to the things you still have. Thus, you have to force yourself to take inventory of what you’re grateful for, what’s good in your life.

Consider following Maslow’s hierarchy of needs and, with each, don’t forget to add perspective. Do you have your health? Do you have a job you love (or one you hate that pays well?)? Do you have a family you can count on? Do you have a place you can feel a sense of belonging? 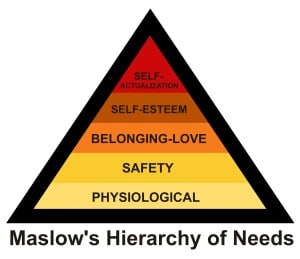 Take a life inventory and, as you think about what you want but don’t have, also consider what you don’t have and don’t want (like leprosy). This will help you find thankfulness.

After you’ve found yourself again, getting your ex back might not be easy, but it will be easier. This is because your ex is watching, studying how you’re handling this breakup. They’re looking for a logical reason to justify their decision to leave you.

If they see you crumbling without them, a shell of yourself, they’ll feel vindicated in their decision. It sounds callous, but it’s human nature.

People want someone who can thrive amidst adversity and uncertainty, someone who can show spiritual, emotional, and physical strength. When you reestablish yourself, you exude this.

If your ex is worth getting back, then they’re also worth you being true to who you are. At best, they see your strength and come running. At worst, they’re no longer interested, but you’ve reconnected with yourself, better equipped to thrive in your next relationship. It’s a win-win either way.

This article was originally published on Relationship Questions Online.

Clayton has been empowering individuals and couples from around the world to find harmony and authenticity in their relationships. With a background in Professional Coaching and Neuro Linguistic Programming, Clayton takes a holistic approach to carefully reconstructing what is truly possible for his clients. Through his work he has revitalized relationships, brought together lost loves, and witnessed clients find their soul mates. Clayton's content has been seen on Fox news magazine, Huffington post, the Goodmen project and he's even had an article featured on The View.
Page load link